SpringBonnie is a animatronic bunny and a antagonist in Five Nights To Remember and One Night To Remember.

SpringBonnie looks similar to SpringBonnie/Springtrap from FNAF3 and FNAF4. she is a golden yellow bunny animatronic, with large rabbit ears on his head. she lacks a bow tie or microphone, unlike FredBear.

During the course of Night 5, SpringBonnie, as well as FredBear, are replaced by the shadow animatronics. While FredBear is missing, SpringBonnie can be found in the now-activated CAM 9. Phone Guy alerts you to NOT check CAM 9. In CAM 9, you can see SpringBonnie sitting on the ground, with what seems to be someone stuffed inside the suit. When you see this, pulling the camera down will result in a red figure standing in front of you. The player will then be unable to access the Monitor. Soon, Freddy Fazbear will make the player black out, and you will be returned to the title.

Springbonnie in Show Stage with Fredbear. 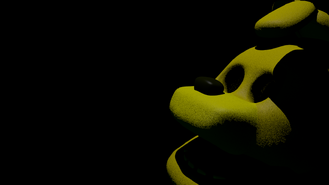 FredbearAndSpringbonnie.png; SpringBonnie In The Dining Area With Fredbear
Add a photo to this gallery
Retrieved from "https://five-nights-to-remember.fandom.com/wiki/SpringBonnie?oldid=4903"
Community content is available under CC-BY-SA unless otherwise noted.